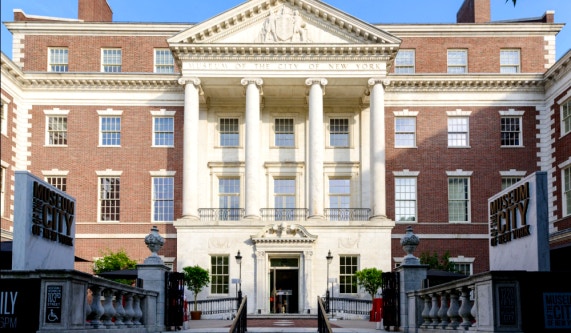 Museum of the City of New York - Public

The Museum of the City of New York was founded in 1923 by Henry Collins Brown, a Scottish-born writer with a vision for a populist approach to the city. The Museum was originally housed in Gracie Mansion, the future residence of the Mayor of New York. Hardinge Scholle succeeded Henry Brown in 1926 and began planning a new home for the Museum. The City offered land on Fifth Avenue on 103rd-104th Streets and construction for Joseph H. Freedlander’s Georgian Colonial-Revival design for the building started in 1929 and was completed in 1932. During the next few decades, the Museum amassed a considerable collection of exceptional items, including several of Eugene O’Neill’s handwritten manuscripts, a complete room of Duncan Phyfe furniture, 412 glass negatives taken by Jacob Riis and donated by his son, a man’s suit worn to George Washington’s Inaugural Ball, and the Carrie Walter Stettheimer dollhouse, which contains a miniature work by Marcel Duchamp. Today the Museum’s collection contains approximately 750,000 objects, including prints, photographs, decorative arts, costumes, paintings, sculpture, toys, and theatrical memorabilia.

The Museum of the City of New York celebrates and interprets the city, educating the public about its distinctive character, especially its heritage of diversity, opportunity, and perpetual transformation. Founded in 1923 as a private, nonprofit corporation, the Museum connects the past, present, and future of New York City. It serves the people of New York and visitors from around the world through exhibitions, school and public programs, publications, and collections.

Reviews of Museum of the City of New York - Public

It was a nice outing and I enjoyed the panel giving their background experiences on their favorite pieces or for one sweet lady her favorite color!

Attended: New York at Its Core: The Archaeology

Attended: New York at Its Core: The Archaeology

It was very interesting to learn more about the anthropological and topographical history of the city.

Attended: Satchmo in the Studio

Informative and entertaining and a great venue!

Attended: Feminists in Fashion with Norma and Christene

Attended: Feminists in Fashion with Norma and Christene

I appreciated the speakers far more than the moderator who talked too much, questions ran on.

Attended: '60s Fashion: The Youthquake and Its Aftershocks

I hoped it was more about the 60's fashion and the brands that most influenced the 60's in general.

Was intended for children not adults.

It was a fun informative class. They gave us a pamphlet that included information on five women that had a major impact in our history.The volunteers asked that we go to the 'Hidden Figures' exhibit prior to starting our doll so that we would gather additional insight and information not contained in the handout. The exhibit and pamphlet inspired me and I came back and made a colorful paper doll that held a sign for equal rights for ALL!

Upcoming Classes at Museum of the City of New York - Public

“Bill Cunningham Was There”
Next start date:

Teachers at Museum of the City of New York - Public