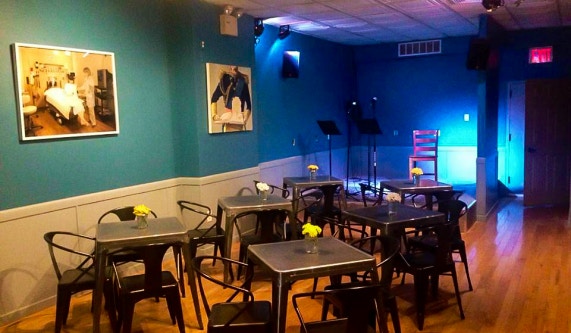 We like to think of Q.E.D. as an after-school space for grown-ups. All the fun stuff you did as a kid but with beer & wine and like-minded folks.

Our affordable classes and shows are as diverse as Queens itself. At Q.E.D. you’ll find arts and crafts, stand-up comedy, tastings, DIY projects, poetry slams, game nights, walking tours, storytelling, gardening, improv, and everything in between.

In a nutshell, we aim to provide a fun, creative, casual space to laugh and learn by opening our stage to performers of various levels of experience and hosting classes and workshops that are affordable and accessible to all types of folks.

What does Q.E.D. mean?
Q.E.D. is an abbreviation of the Latin phrase "quod erat demonstrandum". If you ever do a crossword puzzle, you'll thank us for this bit of info. It translates to "that which was demonstrated", but if you want it to stand for Queens Ed, that's cool, too.

Q.E.D. was created by Queens resident Kambri Crews. A long-time producer and promoter of stand up comedy, Kambri is bringing the fun and creativity home to Astoria. For four years she served as the Director of Marketing and PR for the comedy club Comix, during which time she also owned and operated the 50-seat venue Ochi's Lounge. She followed that by becoming the comedy booker for the 92Y Tribeca. Kambri is also the author of the New York Times best selling memoir Burn Down the Ground (Random House) and an accomplished public speaker and storyteller, giving speeches and performing around the USA. By creating Q.E.D., Kambri hopes to bring the community together to share in learning and laughter.

Notes: OUTSIDE FOOD & DRINKS ARE NOT ALLOWED. QED has coffee, tea, soda, beer & wine plus snacks and pre-made wraps and sandwiches available.

Great class for those who know absolutely nothing of embroidery! We learned five stitches and the basics of knotting, threading, etc. Soraya is an excellent instructor – generous, patient, and a clear communicator. She made us all starter kits to use and take home, and encouraged us to take thread home to finish our projects. Thanks for a great experience! I'd recommend this course to others–– though perhaps at a different venue. Q.E.D. was too cold and not well lit.

Great class! The instructor was fun and it was informative.

Attended: Get Published: A Primer for Writing for the Web

Whitney is very knowledgeable and candid about what she doesn’t know. I found the class engaging and signed up in the spot for another writing class with her!

Very informative and Detailed within a 2 hour time frame.

It was really enjoyable and I loved the space, but a little intimidating for a new artist like myself! By the end I felt more empowered and hope to try another class in the future.

Format was fun with the 2 instructors together. Need to be mic'd to be heard better. Should have had 2nd mic for some demonstrations. Learned enough and had fun. Good class. Thanks.

She was thorough and supportive, patient, accessible Real Got me inspired Its a great way to jumpstart and get going Hope she runs more courses in NYC